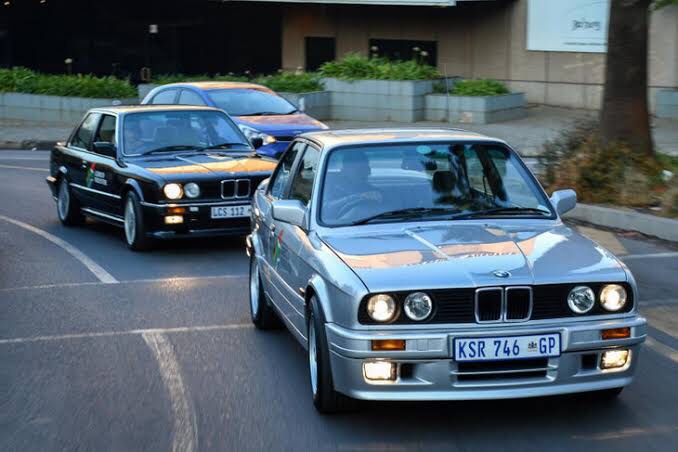 The earliest memory I have of seeing a luxury car, in my township probably includes me seeing a BMW 325i or a Toyota Cressida. Moto ka Nokusho when directly translated means “luxury car”. Now I’m not talking about your Maybach’s and Bentley’s. I’m talking about the timeless beauties that have stood the test of time. Real cars that would have you and your friends “diza” them. I don’t know how to directly translate what “uku diza” means. I’ll just call it biding for cars, but not in the literal sense. This is an appreciation for imoto zikanokusho:

The BMW E30 was manufactured between 1982 and 1994. The first 325i models were only officially introduced in 1985. Fast forward 35 years later and the BMW 325i is still undoubtedly one of the most legendary sports cars around. There’s something about seeing igusheshe being drifted that’s fascinating and beautiful. The first time I watched Mlazi Gangster, I was convinced I wanted a gusheshe, I still do. As much as this beauty is also associated with criminals, you can’t deny the sleekness this car has. They don’t call it “Themba lama rhumusha” for nothing.

The year is 1976 and the first model of the Toyota Cressida just dropped. The car industry is a buzz. It’s nothing like they’ve ever seen before. This compact, mid-size vehicle is perfect for the new generation of smaller, more fuel efficient cars that are taking over. A decade or two later and this car is still making the rounds, in a different time frame. This time around, the local stylish gentle brother ubhuti Solomon can be spotted driving past the neighborhood, while Palafala by TKZee is blasting through the speakers. Even though the last model of this car was manufactured in 1992, till this day, the Cressida is one of the most notable luxury cars in the township. In a way, it’s a representation of the iconic Kwaito era.

Kammu Dee was not lying when he said “Ng’moto yakudala, ng’tazz mina”. The first model of the Toyota Conquest was manufactured in the early eighties. A few years down the line and Toyota decided to give the conquest a face lift and new name. It re-launched it’s hatchback range as the Toyota Tazz. This particular model of cars was a fan favorite as it was stylish and affordable. It dominated the hatch back industry back in the days. Till today, the Toyota Tazz is a fan favorite, in its own special way. It’s still making appearances in Music videos and your faves are still referencing it in their lyrics.

August 8, 2016. The only song you are constantly thinking about on that particular day is “Vura” by Dj Citi Lytes ft Saudi and Sjava. In actual fact, the only other thing that’s on loop at the back of your mind is the first 5 seconds of the song. When that engine starts and the Vura comes alive, it feels like the car in the cover art will also come alive.

In 1984, Volkswagen introduced the first model of the Citi Golf to South African motorists. It was an upgraded version of the first generation Golf Mk1. When the new generation Citi Golf dropped, it hit the ground running. Even though this particular model ceased production in 2009, over the years those who have it have been remodeling it. This is evident through the Vura music video where we see this iconic car being celebrated and appreciated for its beauty.

Here’s a playlist to bump to while you reminisce and go down memory lane.